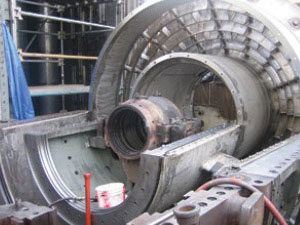 Siemens secured its first H-class gas turbine order in Mainland China. The company will supply two H-class gas turbines, two steam turbines and four generators for a power plant project in Guangdong Province. The customer is Huadian Fuxin Energy Corporation Limited (Huadian Fuxin), a subsidiary of China Huadian Corporation Ltd (CHD), one of the five state-owned power producers in China. The components will be installed at the CHD Guangzhou Zengcheng combined cooling, heat and power plant (CCHP) project located in Zengcheng District of Guangzhou City. After completion the project will be the most efficient gas-fired power plant in China. Commercial operation is scheduled for the end of 2019.

"The situation on the market for power plant equipment is still a difficult one, characterized by tough competition, overcapacities and price pressure," stated Willi Meixner, CEO of the Siemens Power and Gas Division. "Against this background we are pleased to have achieved this breakthrough on the Chinese gas turbine market. This order also marks an important milestone in our close and long-standing cooperation with our partner CHD," Meixner added.

Zengcheng District, one of the three development engines of Guangzhou City, has been committed to building an advanced manufacturing base in recent years. Siemens is helping the district replace small coal-fired industrial boilers with clean natural-gas-fired systems. Siemens also plans to digitally upgrade and network CHD's gas turbines, steam turbines, wind turbines and photovoltaic power generation units. This is to be accomplished by deploying operation centers to build up a multi-energy intelligent power generation system that relies on acquisition and analysis of data from networked fleets to improve market responsiveness and operational efficiency through advanced diagnostic capabilities.

The H-class gas turbine from Siemens can boast of benefits such as high efficiency, short start-up times and fast response to load changes. In combined cycle operation, the output of the 50-Hertz version is more than 670 MW under ISO condition and net generating efficiency greater than 62 percent. One combined cycle unit can meet the electricity demands of a city with a population of 3 million. With over 99 percent reliability and 96 percent availability, Siemens' H-class gas turbines are widely used in combined heat and power (CHP) plants as one of the most efficient ways of converting fuels into usable energy. Siemens had sold 88 H-class gas turbines worldwide, 65 of which have already gone into operation with more than 650,000 fired hours globally, making them one of the highest net efficiency and powerful gas turbine products currently in commercial operation.

Links from the Power Pages e-Newsletter